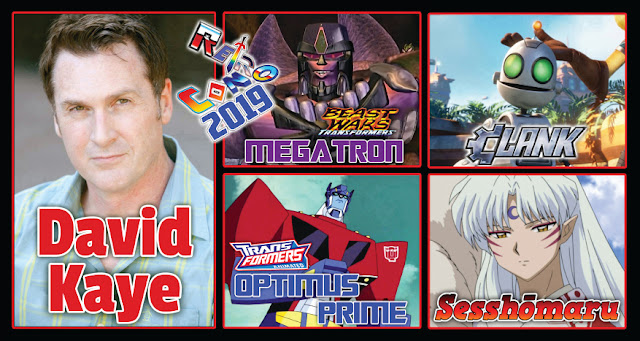 Another award-winning voice actor has been announced for Retro Con 2019! The voice of Megatron (Beast Wars) and Autobot leader Optimus Prime (Transformers Animated series and video game), David Kaye will be a guest at this year's show. He's a member of the Transformers Hall of Fame not jsut for the aforementioned roles, but also voicing Megatron in the Unicron Trilogy as well as Grimlock, Lugnut and Cliffjumper on Transformers Animated among other roles.

Kaye has a 30-year career in voiceover for television, animation, video games, and advertising. Highlights included General Hawk on DiC’s GI Joe, Professor X on X-Men Evolution, Draconis on Exosquad, Recoome on Dragon Ball Z, the Narrator on Kingdom Hearts III, and is the current announcer on ‘Last Week Tonight with John Oliver.’

Retro Con 2019 will be September 14-15 at the Greater Philly Expo Center in Oaks, PA. Vendor tables and weekend passes are available now at the Retrocons.com website. Show hours are 10am-5:30pm on Saturday and 9am-4pm on Sunday. Weekend passes are $25 in advance with at-the-door admission available (kids 12 and under are free with paying adult.)