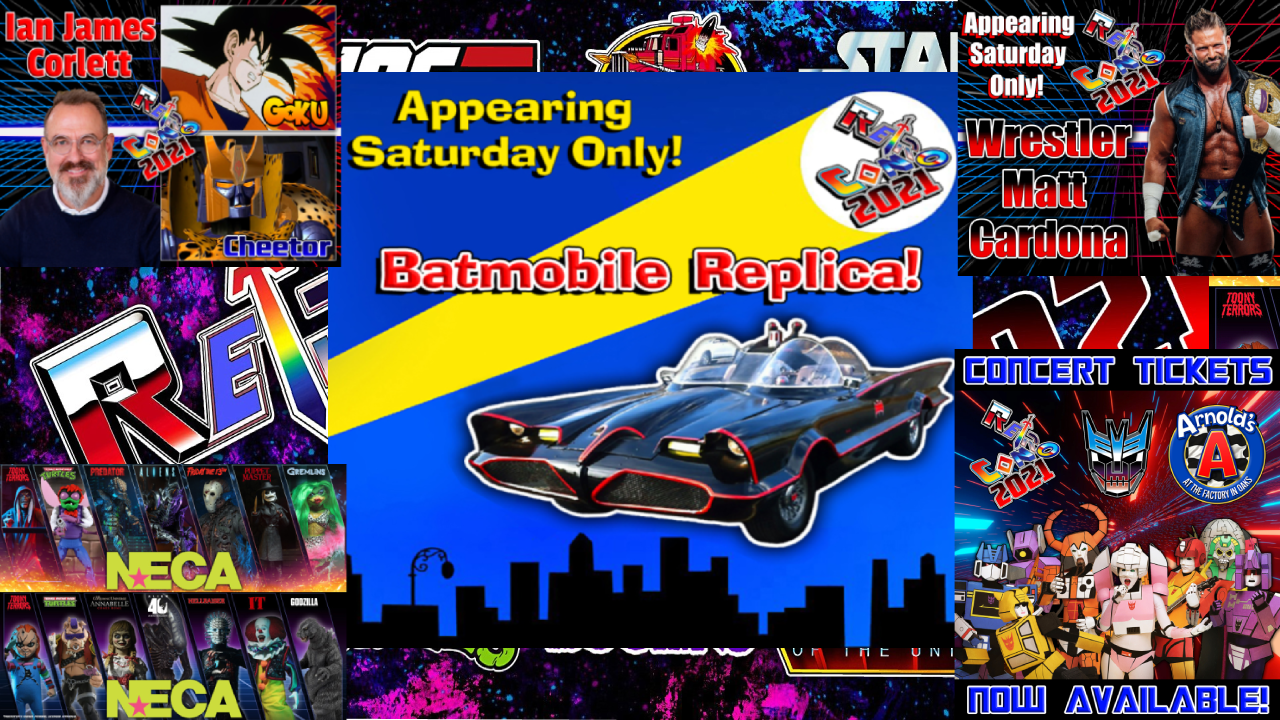 Retro Con 2021 is now only two months away! Our flights and hotels are booked and we cannot wait for this year's show. September 25-26, 2021 are the dates you'll want to circle on your calendar for a retro experience unlike any other. This year's show will have over 200 vendor tables, a video arcade courtesy The Game Is Afoot, special guests, famous cars, raffle prizes, and more. Visit the Retrocons.com website for all the details. Tickets and weekend passes are now available! 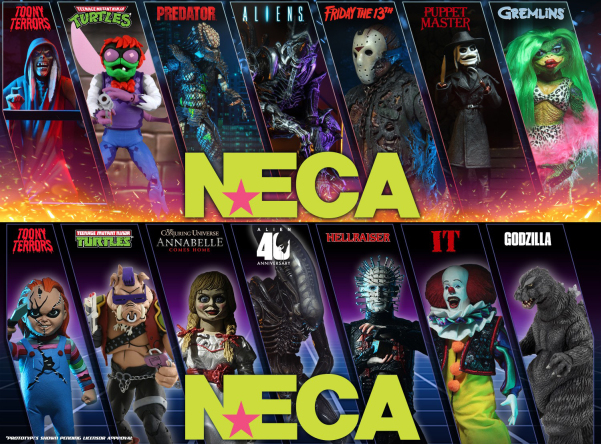 Popular toy maker NECA will be returning to Retro Con 2021 with their warehouse overstock! Yes, this will include hundreds of packaged action figures and other toys, many which have been out of production for years. The picture above is some of their more recent offerings (which might not necessarily be available at the show), but you can expect to see previously available figures from such lines as TMNT, Alien, Predator, AVP, Terminator, Batman, Superman, Rocky, Gears of War, Evil Dead, Friday the 13th, Planet of the Apes, Halloween, Gremlins, Godzilla, and much more. Items will be priced to move!
NECA is scheduled to be at the show all weekend, though they often sell all their stock by the end of Saturday, so we recommend shopping with them that day. Want early dibs? Purchase a weekend ticket to Retro Con because all pre-registrants get in an hour early on Saturday! 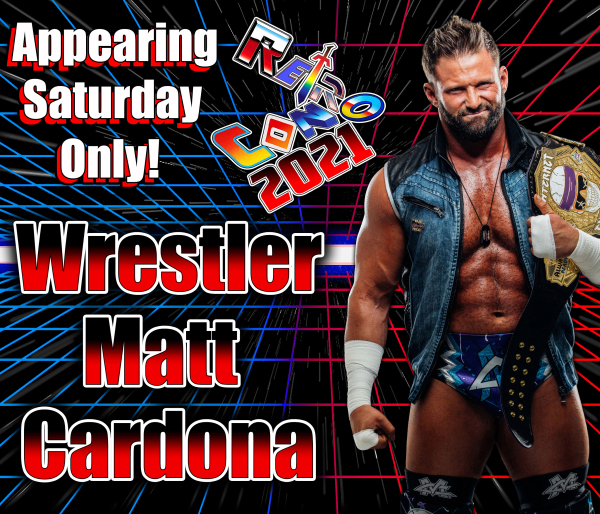 Please welcome to Retro Con 2021, professional wrestler (and toy aficionado) Matt Cardona! Growing up in Long Island New York, Matt’s childhood dream was becoming a pro wrestler. He fulfilled that dream in 2006 by signing with World Wrestling Entertainment (WWE), winning numerous championships in his 14 years there. His biggest in-ring achievement was perhaps at WrestleMania 32 where in front of over 101,000 fans in AT&T Stadium, Matt won a ladder match to win the WWE Intercontinental Championship. He would stay with the WWE until 2020 and is now currently signed with IMPACT! Wrestling.

Matt is also a hardcore collector! In 2018, he started The Major Wrestling Figure Podcast with friend Brian Myers. The weekly podcast about their love of action figures has led into live shows, toy hunts, a YouTube channel, and their very own toy line. In addition to wrestling action figures, Matt also collects Star Wars, TMNT, Ghostbusters, Disney characters, and a whole lot more! Matt will be appearing at Retro Con on SATURDAY ONLY! (signing window to be determined soon). 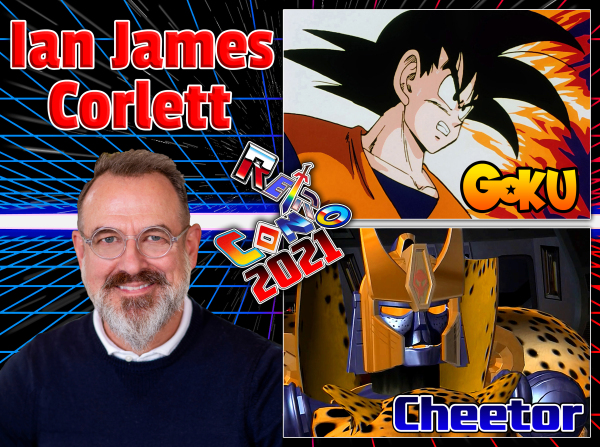 When Dragon Ball Z first reached American television in 1996, it was Ian you heard as the voice of main character Goku! Though considerably edited for violence at the time (compared to its Japanese original,) the show was an instant hit with US audiences and has been a staple of the western anime scene ever since. For those who watched Dragon Ball Z in its early days in syndication and on Toonami, you got to know the character of Goku through Ian’s earnest and wholesome voice performance. Ian voiced the character throughout the entire Saiyan saga and the first half of the Frieza saga.
Ian has also performed voices for other shows like Maximal cool cat “Cheetor” on the popular Transformers series Beast Wars, the “blue bomber” himself Mega Man in the 1994 series (as well as his faithful pooch Rush!), Glitch Bob and Guardian Bob on Reboot, Dr. Wiley on Captain N: The Game Master, Gnawgahyde and Rampart on G.I. Joe, T-bone and Bullzeye on Street Sharks, Coconuts on Sonic the Hedgehog, Hugh Test on Johnny Test, and many more! Come meet him at Retro Con and give us your best Kamehameha!! 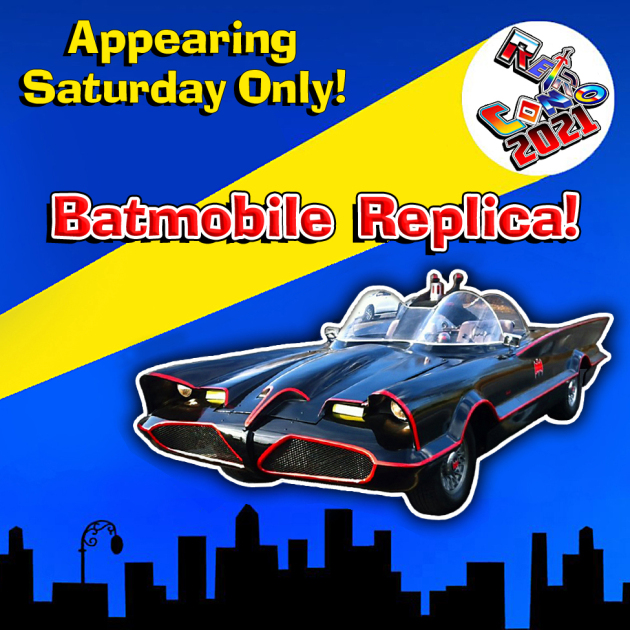 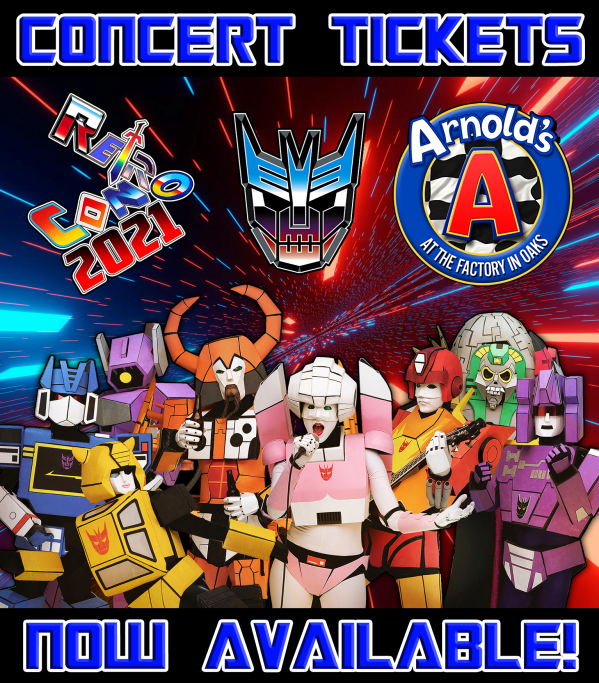 As mentioned earlier, The Cybertronic Spree will be attending Retro Con 2021 early in the day on Saturday and performing live in concert that Saturday night at 8pm at the nearby Arnold’s Family Fun Center. Tickets are now available! Cost is $18 per person and details about the show and venue can be found on the Retro Con website. This will be RD80s third time seeing the band and we can't recommend attending the concert enough!
Only a couple more announcements remain for Retro Con 2021! Stay tuned to Rediscover the 80s in the next week or so for all the details. We hope to see you at the show!
Newer
Older