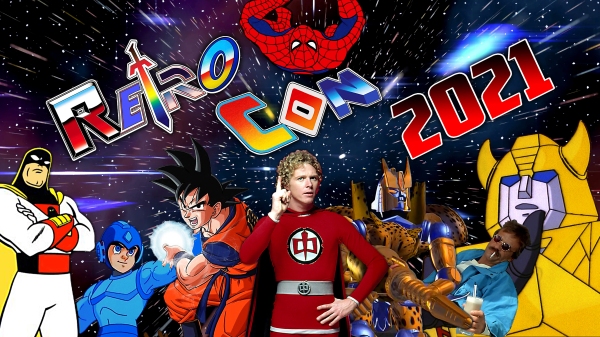 Retro Con 2021 is now less than two weeks away! Mere days separate us from the September 25-26 weekend and we can't wait for this year's nostalgia overload! This year's show will have over 200 vendor tables, a video arcade courtesy The Game Is Afoot, special guests, famous cars, raffle prizes, and more. Visit the Retrocons.com website for all the details. Tickets and weekend passes are now available! 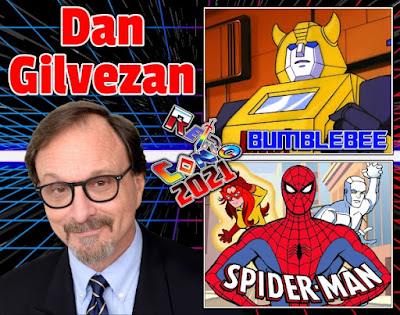 "Spider Friends- GO FOR IT!!" Please welcome to Retro Con 2021, voice actor Dan Gilvezan. Dan is best known in the retro realm as the voice of the original Bumblebee on G1 Transformers! Dan voiced the small but dynamic Autobot in over 45 episodes of the original G1 cartoon, as well as the 1986 feature film, and the Transformers: Devastation video game. And not to be upstaged by a Volkswagen, Dan has another huge role for retro fans: Spider-Man! Dan voiced the webslinger (and his alter ego Peter Parker) throughout 24 episodes of NBC’s Spider-Man and His Amazing Friends Saturday morning cartoon show. Though the show didn’t have a long episode run, it made its mark as one of the most remembered versions of Spider-Man to date due to its excellent voice acting and the chemistry between characters Spidey, Iceman, and Firestar.

Dan's other credits include Hotspot, Outback, Scamper, Snapdragon, and Goldbug (the rebuilt version of Bumblebee) in the Transformers G1 series, Prince Dargon on Sectaurs, Slip Stream on G.I. Joe, Sean Harrison on Jem and the Holograms, and Cooler on Pound Puppies. Dan is also an author and has written an eclectic assortment of books over the past ten years, all available on Amazon. One book of note is Bumblebee & Me: Life as a G1 Transformer which details Dan’s years of recording for the G1 Transformers cartoon series and animated movie and gives insight into the process of voice acting and his interactions with fellow voice actors of the era. Dan will have the book for sale at his table at Retro Con all weekend, so stop by in the guest section to meet the voice of your childhood! 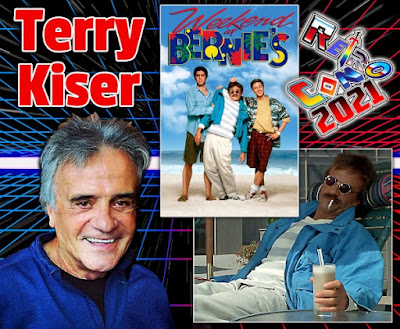 Please welcome actor Terry Kiser to Retro Con 2021! A diverse character actor of over 50 years, Terry is best known for playing rubbed out insurance exec Bernie Lomax in the '80s screwball comedy classic Weekend at Bernie’s. Terry would reprise his title role in the 1993 sequel Weekend at Bernie’s II, this time with 100% more voodoo! Though it didn’t make the splash the original did, it did give birth to the “Bernie Dance” craze, where hundreds of different youtubers filmed their own rendition of the voodoo dance.

Though widely known for comedy, Terry also played the sinister role of Dr. Crews in Friday the 13th Part VII: The New Blood, where he ended up as the 67th victim of Jason Voorhees. He also had the recurring role of nosy reporter Al Craven on Night Court, and played H.G. Wells in two episodes of Lois & Clark. He’s also had appearances on such popular shows like Three’s Company, Knight Rider, WKRP In Cincinnati, Diff’rent Strokes, Hill Street Blues, and many more.
Terry Kiser will be at Retro Con both Saturday and Sunday, so come out and meet him! He’ll have the Bernie glasses in tow! 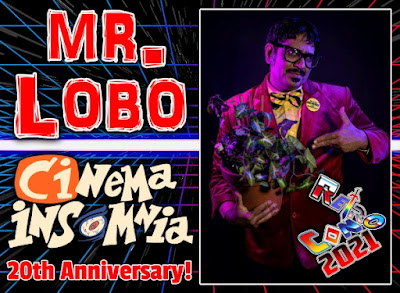 Host of Blobfest at the Colonial Theatre for 9 Years and producer and curator of many Creature Features tributes and live Spook Shows. He has appeared in many Mystery Science Theater 3000 box sets and nostalgic documentaries-like American Scary, Monsters Among Us, and Virginia Creepers. He played the Amazing Criswell in PLAN 9 (2016), a remake of Ed Wood’s Plan Nine From Outer Space (1959). A regular guest on Coast to Coast AM with George Noory and Cinemassacre with James Rolfe (the Angry Video Game Nerd)!

He worked on the retro horror flick The Ranger for Shudder network. He was even spoofed on Scooby Doo Mystery Inc., and attacked by wrestler Chris Jericho on TMZ. He will be seen in the upcoming horror film Feeders 3. Mr. Lobo lords over slumber party movie fun with his patented blend of humor & satire and claims “They’re Not Bad Movies–Just Misunderstood”. 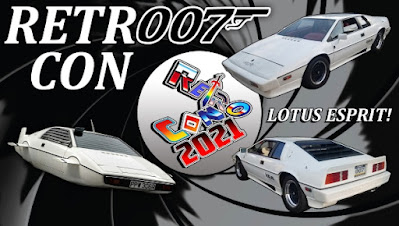 Frank Bedo and Monica Tulay of Jurassic Adventures have a new toy - A classic Lotus Esprit, very similar to the model seen in the classic 1977 James Bond movie The Spy Who Loved Me! They’ll have their sleek sports car on the show floor at Retro Con for Secret Agent photo ops with attendees, right next to their JP jeep.

“Can you swim?” No promises yet, but Frank and Monica are also trying to rig up a “Wet Nellie” mode for the show! Representing one of the coolest scenes in James Bond history, where the Esprit drives off a pier and dramatically transforms into a submarine. A full 8 years before M.A.S.K., and 40 years before GTA5 did it! 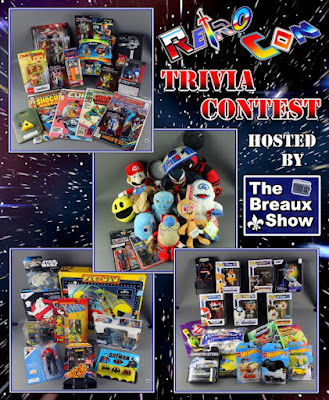 Happening Sunday at the show, we’ve got a comprehensive (read: random) mix of stuff to give away. Plushes, LEGO, Hot Wheels, mini arcade games, comics, Funko Pops, action figures, and a whole lot more! *Milk for the Ghostbusters Afterlife cereal not included.

The Trivia contest is tentatively set for 11:30am on Sunday. No sign-ups are required, simply be at the panel area around start time. We’ll reveal each item one at a time, then ask a trivia question related to it. Directly after we’ll randomly call on a person in the audience with their hand raised to answer. If they get it right, they win the prize on the spot. If not, we ask a different audience member until the prize is claimed. It’s a snap! 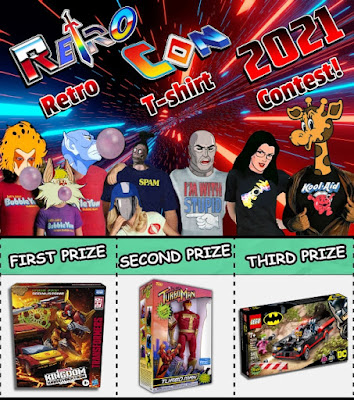 You’re going to wear a geeky shirt to the show anyway… might as well win something for it! Retro Con’s Retro T-shirt contest will be BACK for 2021!

A longstanding tradition at fan gatherings is attendees wearing t-shirts expressing their favorite characters and brands. Retro Con has turned this trend into a unique contest to win free stuff! Hosted once again by The Breaux Show, the Retro Con T-shirt contest will be held in the panel area midday on Saturday, and we want to see your Saturday best! Your t-shirt can be vintage, new, or custom made. As long as it’s retro-related, you’re welcome to enter! See official rules for more details.
Finally, the official schedule! Here is everything to take in on both days of Retro Con 2021:

10:00am: Show Opens to General Public

11:45am: The Retro Con Retro T-Shirt Contest, hosted by The Breaux Show!

11:30am:  The Retro Con Trivia Contest, hosted by The Breaux Show! (Panel Area)

2:00pm: Panel- From Bumblebee to Spider-Man! A Q&A with Dan Gilvezan! Hosted by Fandom Spotlite!

This wraps our announcement coverage for Retro Con 2021 but we aren't done! RD80s will be posting pictures and live videos from the show all weekend on our social media. Make sure you follow Rediscover the 80s on social media if you can't make the show, but we hope to see many of you there!
Newer
Older