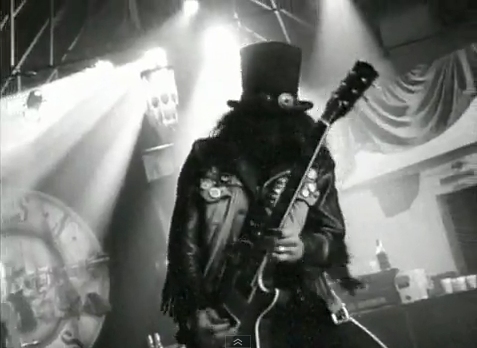 The 1980s were not just full of synthesized and saxophoned pop music, but the greatest decade for music also featured rock tracks that were destined to be legendary. Sometimes you can tell from the song's introduction that it's something special. Many great speaker-blowing guitar riffs came out of the 80s and this Ultimate 80s Guitar Riff Intros Playlist will highlight the ones that hit us from the beginning of the song.

Now, some of these tracks you'll notice might have another instrument that briefly leads in the song, but I created this playlist mainly to rock you from the get-go! I've posted a few videos from these 80s guitar masterpieces below, but to save on load time, click the song title to watch more via Youtube. Rock on!!

Guns N' Roses "Sweet Child of Mine" (1987)
No other place to start this playlist but with Slash's most melodic offspring from 1987's Appetite For Destruction album. Music and guitar magazine's alike have consistently ranked this song as one of the best of the 80s and one of the greatest guitar tracks of all time. His bridge solo in this song is also one that makes my guitar honor roll and would proudly display with a bumper sticker.

Rush "Limelight" (1981)
The newly inducted hall of famers had my vote this year just for this song. By far my favorite track, Alex Lifeson's guitar intro brings to life an intense illumination of talent and proves why Rush's Moving Pictures album has been their most successful to date. I didn't truly dive into their discography until the early 2000s and it was mainly due to hearing this song on the radio. Since then, I've considered Rush one of the greatest power trios of my generation.


The Clash "Should I Stay or Should I Go" (1982)
This guitar intro is one of the most widely recognizable of the 80s and like the previous entry to this playlist, it contributed heavily to their most successful album Combat Rock. The real question is...if you heard this song on the radio now, would you stay or would you go? (I'd definitely stay.)

Joan Jett & The Blackhearts "I Love Rock 'n Roll" (1981)
How many dimes do you think have been spent over the years just to hear the guitar riff at the beginning of this song? A cover of the British band Arrows, Joan Jett's version had jukebox repairmen working overtime across the US spending 7 weeks at #1.

Van Halen "Panama" (1984)
One of my favorite tracks from probably my favorite Van Halen album, there is no "easing the seat back" when this song first hits you. Despite it's Central America title, the lyrics are actually about a car and during the bridge when David Lee Roth talks about "I can barely see the road from the heat comin' off of it," you can hear Eddie Van Halen's Lamborghini revving it's engine. Word has it, he backed it up to the studio and put microphones near the exhaust pipes to record the sound effects. Now that's rock n' roll, ladies and gentlemen.


Scorpions "Rock You Like a Hurricane" (1984)
Remember when having your video in heavy rotation on MTV meant something? This tsunami of sound does as these German rockers enjoyed their greatest success until the whistling power ballad "Winds Of Change" climbed to #4 in 1991 on the US charts. If there was a head-banging aerobics workout, this song would lead off each class.

U2 "Where The Streets Have No Name" (1987)
Taking some liberty with this entry to the playlist because of the extensive keyboard intro that leads into The Edge's signature guitar riff. A prerequisite for all rooftop concerts to this day, U2's anthem sets the tone for their best-selling album "The Joshua Tree" and created a story for retired LAPD cops to tell their grandkids. "Remember that day in '87 when a 1,000 people made a beer run at that corner liquor store?"

AC/DC "You Shook Me All Night Long" (1980)
Seriously, take your pick of AC/DC tunes in the 80s (or 70s & early 90s) and you could make a case for just about all of them having great guitar intros. I choose this one mainly for that wall-shaking first chord...and for duck walking on lighted stages surrounded by leather clad girls on mechanical bulls and stationary bikes which I believe were available for hire by the hour from 1980-89.

Rolling Stones "Start Me Up" (1981)
This song has a killer guitar intro and provided the perfect soundtrack for purple spandex muscle shirt workouts like you've never seen. Known now for starting up football games across US stadiums, it peaked at #2 on the US charts for three weeks leaving these grown men crying over the soft rock sultans of Christopher Cross and Hall & Oates.

George Thorogood & The Destroyers "Bad To The Bone" (1982)
You might think of the film "Problem Child" or the monster truck Gravedigger when you hear the guitar intro to this song. But other than the uses in pop culture, kings and queens would probably also step aside to this blues riff by a stuttering, cigar-smoking, pool hall hustler. The only un-bad thing about the music video...keeping your pool cue in a guitar case. Seems a little excessive if you ask me.

One of my favorite guitar intros of the decade, it has continued to thrive in pop culture being used as the entrance music for WWE wrestler CM Punk and in the Guitar Hero 3 video game. Easily the band's most successful track, it earned them two MTV music awards including the dreaded Best New Artist "kiss of death" award.

So how'd I do? Tell me what killer guitar intro I left off the playlist that would've been on your list. Leave a comment!