Halloween Pranks Of An '80s Teenager 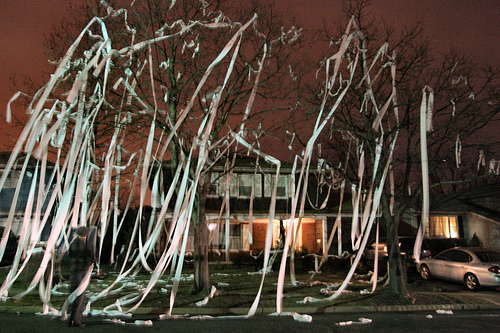 Most of us reach a crossroads at some point in our early teenage years...is dressing up as Matt Trakker for a bag full of Halloween goodies worth the humiliation from your friends who are "too cool" to go trick-or-treating? Most of us at that point succumb to peer pressure and end up initially regretting our decision that first year we official quit the free candy shopping spree. The decision was usually met under the condition that you could always sneak candy from your parents' trick-or-treating stash. But ending the door-to-door candy haul usually began new traditions like scary movie marathons, costume parties, or Halloween night pranks.

For me, it was the latter. I remember the older kids in my neighborhood in central PA who were out to scare kids and play pranks on Halloween night when I was still trick-or-treating. Usually they were out for a cheap scare, followed by some tears or a sprint toward the parent's car. Other older kids were out to prank houses in the neighborhood; simple stuff that was really more to annoy the homeowner than to warrant a call to the cops for vandalizing property. That was what interested me and my friends, a game of "can I mess with my neighbors without them finding out it was the kid across the street that mows their grass." So here are some Halloween pranks that my friends and I resorted to after we gave up our rubberband strapped masks and costumes. 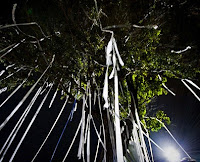 When I moved to Montgomery, AL it didn't take long for me to learn that toilet-papering trees is actually a tradition if you're an Auburn alum. But as a teenager in the late '80s, papering trees was more infamous. It was the perfect prank because it challenged the prankster and made for a tough clean up for the homeowner. "T.P.ing" a tree took a skilled throw. The perfect technique was unrolling a small amount and then launching all the way over the tree. (Came in handy that I was a baseball player...and a pitcher at that.) You had to be relatively accurate too because you never knew how many throws you were gonna get before the homeowner heard what was going on (usually from all the laughing.) Another good reason to paper a tree was the difficulty involved for the homeowner to remove it, mainly because it was impossible to just rake it off the tree. It took a good soaking rain or strong winds to get it all out of the tree, which could be weeks after Halloween.

Harmless yet creative. I distinctly remember my dad going nuts after some kids soaped our garage door windows on Halloween one year. It was probably his reaction that encouraged me to stash a couple bars of soap for our teenage Halloween antics. Creativity was definitely encouraged for this prank, depending again on how much time you had to draw a jack-o-lantern or a silly face. Most of the time it was just covering as much of the window as possible, so it was harder for the home (or car owner) to wipe off. Some of my friends went out of the way to find an obscure window, like on a tool shed, so the prank wouldn't be found for awhile. Sometimes a game of "can you top this" would occur, where you tried to get to a window up high enough to where you could almost hear the person walk out of the house the next day and say "how in the world did they get that window up there?" 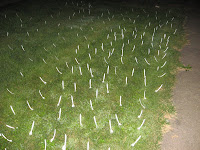 This prank was a little on the expensive side, but when executed properly, left homeowners with aching backs the day after Halloween. Forking usually was a team effort in both preparation and execution. First, you needed a good amount of plastic cutlery, which if was not in high demand at your house, left you scrapping for spoons and knives as well. Typically, my friends and I combined our resources and saved the forking for one yard. A good forking covered the yard, but depending on who lived at the house, a spelled word or a happy face could also make a point. The best forkings were spread out over the whole yard and were a couple feet apart from each other. You never wanted them close together that the homeowner could pick up a handful in one stoop. It was always good to put a few under overgrown shrubs or in gardens to find later.

I've learned that the art of corning a house isn't a nationally known Halloween prank. It was probably the most fun prank I remember doing, but as I've tried to brag about it over the years, I've received alot of blank stares. This could be accounted to rural vs. urban backgrounds, but I've never confirmed that. Corning was a simple prank that drove homeowners crazy who were trying to have a peaceful Halloween night away from trick-or-treaters. Basically, you took a handful of field corn and throw at someone's front door or window (tin roof porches work great too.) You wanted to create a loud noise that would typically scare anyone in close proximity to the front of the house. Plus, there was the fact that they had to clean it up the next day. We had corn fields that were a short hike through the woods from my friend's house at the end of the street. We usually took a backpack and filled it with ears of corn a few days before Halloween. We'd take them back to our fort in the woods and start shucking away. We'd put the shucked corn back in the back pack and were all set for Halloween night. We were very creative with it, hiding out until the right time to throw at front porches. I do remember one year that the father of the rich kid up the street was onto us somehow. He probably overheard us bragging to his kid about what we were gonna do. Anyway, that Halloween night he hid outside behind a row of bushes with the garden hose. There was another row of bushes directly across the street which was the perfect place to hide and setup a long throw. He must've waited for awhile because he was ready to douse us the minute we popped up to throw the corn. Needless to say, it was awhile before we went back to that neighbor kid's house.

So those were a few pranks I remember doing as a kid. No smashing pumpkins. No scaring little tykes with bloody corpse costumes. Just a little something to replace the typical fun that trick-or-treating brought on Halloween night. 'Cause face it...watching a ticked off elderly neighbor was just as enjoyable as a handful of snack-size candy bars.