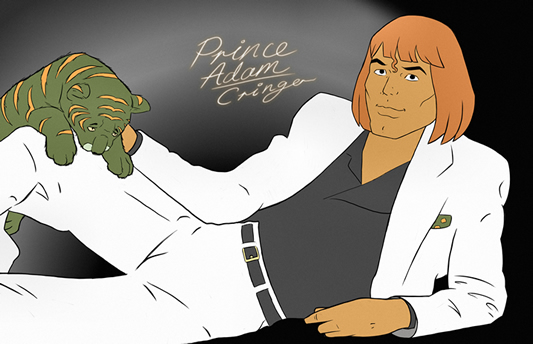 On Friday May 4th, tentatively known as "Star Wars Day", I came across a picture that had me tracking down another great 80s fan artist. Dex1138, who is fellow contributor to UnderScoopFire.Com, posted a "Millennium Falcor" picture on Twitter that had smiling from ear to ear as a fan of The Neverending Story movie. Luckily, my quest to find the creator was easy this time, as James Hance's website was included in the picture. I contacted  James and he excitedly agreed to let me feature some of his 80s "mashup" art on the Rediscover the 80s website. I encourage everyone to visit his site when you are through viewing my favorites below.
Wookiee The Chew
James has put a whole new spin on the classic Winnie the Pooh franchise. He's taken the characters and added a Star Wars twist! He calls the series of prints "Wookiee the Chew." He's even completed the first book in a children's book trilogy which he dubs as "24 pages of affectionately crafted adventure, brand new b&w illustrations and sneaky Star Wars references - a tribute to the combined genius of George Lucas, A.A. Milne and E.H. Sheppard. Suitable for jedi apprentices of all ages!"

Available Prints
The "Prince Adam's Cringer" print (taken from Michael Jackosn's Thriller album cover) that headlines this post is one of my favorites that James currently has available. These 80s "mashup" creations of franchises like Star Wars, The Muppets, and Master of the Universe are really imaginative.

I'm a big Firefly fan and this mashup with the Muppets is awesome!

"Kermit Calling", a take on the iconic Clash image...

"The Fraggleship Of The Radish" mixing Fraggle Rock with Lord of the Rings...

"Where the Wild Things Are" mashed with Star Wars in "Till Luke Said"...

James has numerous one-off paintings, retired prints, and commissions in his archive. More great mashups from Star Wars including the "Mona Leia", the "Super Blues Brothers" as the Mario Brothers, and a hilarious pose of Jimi Hendrix playing Guitar Hero. More great originals from James are available as t-shirts through Red Rubble and ship internationally. You'll find silly shirts like "Named After The Dog" in an Indiana Jones font and a take on the Starbucks logo with the Swedish Chef titled the "Starbörks Kerfee." Visit his main site at JamesHance.Com to also find his blog or contact him for commissioned projects. You can also find him on Facebook and Twitter. Many thanks again to James for allowing me to feature his art on Rediscover the 80s!
Newer
Older